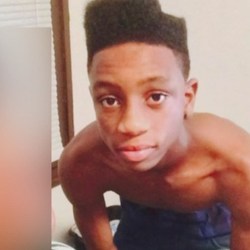 15-year-old Andre Green was shot and killed by Indianapolis police on the city’s northeast side Sunday night. Indianapolis Metropolitan Police Department said officers noticed a car near East 30th Street and North Chester Avenue that matched the description of a vehicle that had been carjacked. Police say the carjacking happened in the 3100 block of Thompkins Square Court earlier that evening.

Officers say the suspects inside the car were seen shooting at people when they stole the car. Investigators say officers first followed the car at a safe distance. The car turned down a dead end near 34th and Butler Avenue, and that’s when they say the driver accelerated and tried to do a U-turn. Officers then attempted to stop the car, when the driver rammed a police vehicle on the driver’s side. Multiple passengers then exited the car and ran westbound.

Police say the Green refused to exit the vehicle and almost hit an officer with the car. They said the suspect began turning the wheel of the car toward the officers and accelerated. At that time officers fired their weapons at the driver, according to IMPD. They say the Green then got out of the car armed with a gun and collapsed by the driver’s side door. He was pronounced dead at the scene.

On August 11, 2015, Tanya Bell, President of Indiana Black Expo, and Dr. Michael Twyman, Executive Director of Your Life Matters, issued a joint statement on the shooting death of Andre Green.

The officers involved will be placed on administrative leave pending an investigation. This is a standard IMPD procedure following a police involved shooting. On September 3, 2015, the parents of Green announced plans to file a wrongful death lawsuit alleging that officers were negligent and violated their son's constitutional rights.