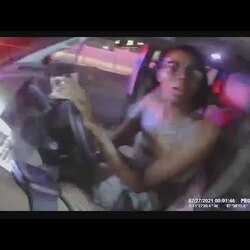 Alexis C. Wilson, 19, of Homewood died after Dolton police shot into her car as she dragged one officer and struck another at a restaurant drive-thru early Tuesday, badly injuring both officers, officials said.

Dolton police were called around 1 a.m. Tuesday to Baba’s Famous Steak & Lemonade restaurant at Oak and Sibley Boulevard for a woman with a gun who was upset, Dolton spokesman Sean Howard told reporters.

Officers ordered the woman and a man inside the car to get out, Howard said. The man complied but the woman refused.

As one of the officers tried to remove her from the car, the woman sped off and dragged the officer with him hanging halfway out of the window, Howard said. Another officer then fired three times into the car, Howard said.

The woman died at the scene, Howard said. It’s unclear if she died from gunshot wounds or from the crash.

The two officers were taken to a hospital and were in serious condition, he said.

“This was unfortunate,” Howard said. He said witnesses were cooperating with police.

Illinois State Police were investigating the officers’ use of force, Howard said.