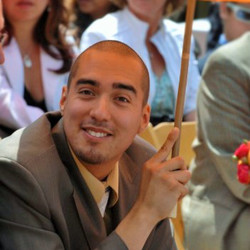 “It was 59 shots from those officers that took Alejandro Nieto away from his parents. They fired 59 shots at a man who did not fire a single shot.”

On Friday evening, March 21, 2014, Alejandro “Alex” Nieto, 28 years old, was killed when he was struck by 14 to 15 bullets (of a total of 59 shots) fired by four San Francisco Police Department officers, on Bernal Hill Park, without justification. The officers who killed Alex Nieto are: Sgt. Jason Sawyer (then lieutenant), Officer Roger Morse, Officer Richard Schiff, and Officer Nathan Chew.

Alex was enjoying his dinner near a bench with a sunset view to Twin Peaks, dressed for his security guard shift with his licensed taser at his hip. He was also wearing his elegant new 49ers jacket.

A dogwalker called 911 simply because he didn’t like the sight of this young Latino working class man on Bernal Heights. Police confronted Alex as he was walking downhill on his way out of the park, and killed him with two sequential volley of shots. The first volley took him down to the ground. The second volley of over ten shots killed him.

An eight-member jury decided in March 2016 that the officers had not violated the constitutional rights of Alejandro “Alex” Nieto.

October 2016 Cop who shot Alex Nieto involved in another shooting

Proposition D, which needed majority approval to pass and received 80 percent in support as of press time, ensures all police shooting incidents will be investigated by the Office of Citizen Complaints.