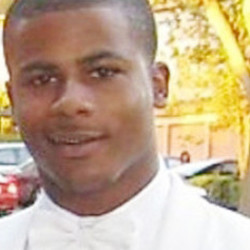 Whereas a Black person is killed by law enforcement once every 36 hours, per the Malcolm X Grass Roots Movement’s study;

Whereas two new reports by a federal monitor criticized the OPD’s handling of officer-involved shootings and Occupy Oakland protests;

Whereas Alan Blueford, an 18 year old Black youth, who was about to graduate from Skyline High School, was killed by OPD Officer Masso on May 6.

Whereas OPD has provided at least four versions of what happened the night Alan Blueford was killed, including the claim that the Officer Masso was shot in a gun battle with Alan Blueford, when he later admitted that he shot himself in the foot;

Whereas Alameda County District Attorney Nancy O’Malley declared she will not charge Officer Masso for the killing of Alan Blueford. Her report shows strong bias as, for example, relying on Masso’s statement that Alan was standing when he first shot him; despite 11 out of 12 witness statements to the contrary;

Therefore, be it resolved that the Alameda Labor Council pass a resolution seeking Justice For Alan Blueford and  demand that the Federal Monitor and Compliance Director appointed by Judge Henderson take strong action against OPD including:

Finally be it resolved that the Alameda Labor Council send this resolution to U.S. District Court Judge Thelton Henderson, Alameda District Attorney Nancy O’Malley, ALC affiliates, the California Federation of Labor, and the AFL-CIO, for concurrence and action.

June 2014 A $110,000 settlement for the family of a teen shot and killed by an Oakland police officer more than two years ago was approved by the Oakland City Council Tuesday night, the family's attorney confirmed today.