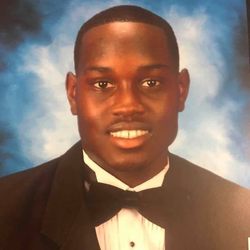 On February 23, 2020, Ahmaud Marquez Arbery, an unarmed 25-year-old African-American man, was fatally shot near Brunswick in Glynn County, Georgia, while jogging on Holmes Road just before the intersection with Satilla Drive in the Satilla Shores neighborhood.

A video of the incident was recorded by William "Roddie" Bryan, a neighbor of the McMichaels, using his cellphone from his vehicle as he followed Arbery jogging down a neighborhood road.From the camera's perspective, Arbery is seen jogging on the left side of the road when he encounters a white pickup truck that has stopped in the right lane. Gregory McMichael is standing in the truck bed, while Travis McMichael initially stands beside the driver's door with a shotgun. The vehicle of the person who was recording comes to a stop behind Arbery and the pickup truck.

As Arbery approaches the pickup truck, shouting can be heard. Arbery then crosses from the left side of the road to the right side and runs around the passenger's side of the truck. After passing the truck's front, Arbery turns left. Meanwhile, Travis McMichael, holding his shotgun, approaches Arbery at the truck's front. The camera's view of the confrontation between Arbery and Travis is then momentarily blocked.

Several media accounts of the video report that the audio of the first gunshot seems to be heard before Arbery and Travis struggle with each other. Some media accounts first report a struggle, and then mention the gunshot(s). Other media accounts describe that it was "not possible" to see from the video what was happening when the first gunshot was fired, or report that the truck "blocks the view of how the men first engage each other" with regard to when the gunshot is heard.

Travis and Arbery grapple over the shotgun in view of the camera. While struggling, both men disappear off camera view on the left side of the camera frame, after which the audio of a second gunshot is heard. When they come back into camera view, Arbery appears to throw punches and tries to grab the shotgun. A third gunshot is heard being fired by Travis at point-blank range as Arbery appears to throw a right-handed punch at his head. Arbery recoils back, stumbles, and collapses in the middle of the road face-down while Travis walks away. Gregory McMichael, who has taken out a handgun but not fired, then runs towards the other two men.

On June 24, 2020, the three white men accused of killing Mr. Arbery, a black man who was chased while jogging in their neighborhood, were each indicted on nine counts, including felony murder.

In November 2020, A judge denied bond to the father and on charged with killing Ahmaud Arbery.

Former District Attorney Jackie Johnson has been indicted on misconduct charges for her role in the murder investigation of Ahmaud Arbery. The former Brunswick prosecutor faces charges of violation of oath of public officer and obstruction of a police officer.

Despite having a population of 25 percent African Americans, only one of the jurors chosen in the case is black.

On November 24, 2021, the three defendants were found guilty of multiple counts in the indictment.

Jan 7 2022 - Three defendants sentenced to life in prison, two with no possibility of parole

On February 3, 2022, Travis and Gregory McMichael, two of the three men convicted of murdering Ahmaud Arbery in state court, reaffirmed their pleas of not guilty in their federal hate-crimes case, after their proposed agreements to plead guilty were rejected. Their decision virtually ensured a future trial.