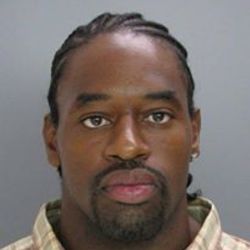 Adrienne Jamarr Ludd, 36, was killed Thursday afternoon, October 22, 2015 in a shootout involving Sacramento County sheriff’s deputies in Carmichael, CA. Sheriff’s officials said the incident began about noon Thursday when a deputy tried to stop a vehicle with expired registration near Manzanita Avenue and Winding Way. The deputy observed two men inside the vehicle. Officials said the deputy tried to pull over the vehicle, which sped up and pulled away. The deputy reported seeing one of the vehicle occupants “grabbing something from the back seat” during the pursuit. They said Ludd finally yielded, and his passenger immediately exited the car with his hands in the air. As the deputy was making contact with the passenger, officials said Ludd fled the scene in the car. The fleeing vehicle stopped in the middle of Cypress Avenue west of Garfield Avenue. Officials said Ludd exited the vehicle armed with a handgun and took cover behind his car. Sheriff’s officials said Ludd took a shooting stance and leveled his gun at officers, and officers fired “several rounds” at Ludd. In Friday’s news release, officials said Ludd was armed with “a loaded Tec-22 handgun with a high-capacity magazine,” and that “further investigation has shown the suspect’s weapon was not functional because of a jam.”

Family members and representatives from the local Black Lives Matter chapter on Monday held a news conference to draw attention to the case.

“If he’s wounded, kick the gun away and he can sit in jail,” Latrell Ludd said. “They are trying to justify the killing.”

The Sheriff’s Department has thus far declined to release the footage, citing the ongoing investigation. An official autopsy report has not been released by the coroner because of probe.

Ludd was a convicted felon who had left crime behind until recently, when he began dealing drugs again, family members say.

The deceased man’s wife, Amy Ludd, said she did not know her husband had guns or sold drugs. The pair, married three years, separated about four months ago, but Ludd said she had hoped they would reconcile.

“The man I married is not like that,” said Ludd, 31, who was pregnant with the couple’s daughter at the time of the shooting. “He was completely against that whole lifestyle.”

Turnbull said the Sheriff’s Department inquiry would clarify what happened during the incident, but he made no promise that the dashcam video would eventually be released. The deputies, initially placed on administrative leave, have returned to duty.