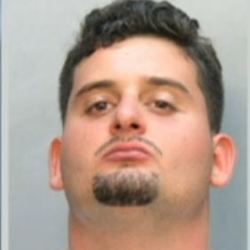 Adrian Montesano’s friend and business partner was trying to figure out what caused the young man to snap on Tuesday, when Montesano allegedly stormed a Miami-Dade drugstore at gunpoint, then shot multiple police officers, stole a patrol car, and wrecked another vehicle before police shot him and another man dead in a hail of bullets.

“I watched it all go down on TV, just like everyone else,” said Manny Quiros, who for the past six years has owned a small air-conditioning business with Montesano called Montesa Solutions. Quiros said he had been friends with Montesano for more than a decade. “All I can say is, he’s a good guy, and I have no idea why he did what they’re saying he did.”

23 officers shot 377 round into the car, killing Montesano and his passenger Corsini Valdes

Neither man was armed and Valdes was innocent of any crime