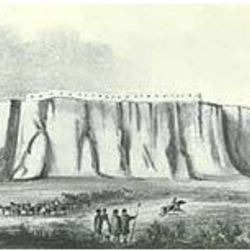 The battle began the following morning, January 22, 1599. For the first two days the Spanish and Acoma skirmished inconclusively until Zaldivar developed a plan to breach the pueblo using a small cannon. On the third day, Zalvidar and twelve of his men ascended the mesa and opened fire on the pueblo with the cannon. After some time, several Acoma homes caught on fire and were destroyed while the conquistadors stormed through the settlement. There were an estimated 6,000 natives living at or around the Acoma Pueblo in 1599, at least 2,000 of whom were warriors. Of the 2,000, about 500 were killed in the battle, along with about 300 women and children. Some 500 prisoners were taken and later sentenced to a variety of punishments. Don Oñate ordered that every male above the age of twenty-five would have his right foot cut off and be enslaved for a period of twenty years. However, only twenty-four men actually received amputations. Males between the age of twelve and twenty-five were also enslaved for twenty years along with all of the females above the age of twelve. Many of these natives were dispersed among the residences of government officials or at Jesuit missions. Sixty of the youngest women were deemed not guilty and sent to Mexico City where they were "parceled out among Catholic convents". Two Hopi men were taken prisoner at the pueblo; after each had one of his hands cut off, they were released to spread the word of Spain's resolve.

This source gives great information about what happened during the Acoma Pueblo Massacre.  It is credible because the information stated has been supported through other sources I have researched on this topic.  This is one of the best websites I found on this topic with the most pertinent information.  There is one typo on the website, when it says "In December, 1898" it should say in December, 1598.   The reasons for this massacre started when the King of Spain ordered Governor Juan de Onate to invade New Mexico and raid Native American Pueblos (legendsofamerica.com).  In December of 1598 a party of Spanish soldiers arrived at Acoma seeking food, they were welcomed until the soldiers were aggressively trying to get food.  The Acoma people wouldn't have been able to survive without the food, so they had to defend themselves by killing the soldiers.  One of the soldiers killed was Juan de Zaldivar, a nephew of Juan de Onate. Juan de Onate was furious and sent his best soldiers to make an example of Acoma. The Spaniard's take over of the pueblos and Onate's reaction to the death of his nephew are what caused the massacre at Acoma pueblo. Onate's troops arrived on January 21, 1599 which started this three day battle.  The battle turned into a massacre and 800 people from Acoma were killed. There were only a few men of fighting age left and Onate ordered their left foot to be cut off.  A lot of Acoma people were sold as slaves and the people of Acoma were almost completely wiped out.  The population of the pueblo was approximately 2,000 people and after the massacre there were only about 250 survivors (legendsofamerica.com).  Later, Juan de Onate was banished from New Mexico because he was found guilty of cruelty to Native Americans and colonists.  He appealed the ruling, was cleared of all charges and lived the rest of his life in Spain.