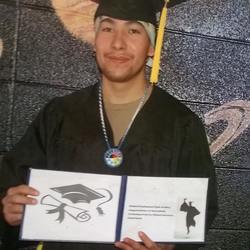 Raymond Gassman, 25 yrs old, was shot and killed by Rosebud Sioux Tribal Police on February 3, 2016. Raymond was shot point blank. After shooting Raymond, the officer shot his own wrist and called for back up. According to a witness, there was a child inside the home when this happened.

"A police officer entered the home at Fairground Housing 285 to arrest Raymond Gassman. According to a 15-year-old witness in the home, there were five people, including herself, in the house at the time: Rita Burning Breast, 18, Jeremy Lofton, 19, Josie Yellow Eyes, 25, and her six-year old child.

The witness then stated that the officer shot at point blank range. He yelled, “Call 911!” A second officer came into the home, handcuffed Mr. Gassman, and “left him on his stomach bleeding out, gasping for air. The paramedics arrived, rushed the officer to the ambulance and left the victim to bleed to death on our living room floor.”

The FBI was contacted immediately and responded. Upon their arrival all evidence including the Officers Body Camera were turned over to the FBI. The FBI has assumed all aspects of the investigation.

Raymond is the cousin of Paul Castaway (killed by Denver police in a mental health crisis). #PaulCastaway