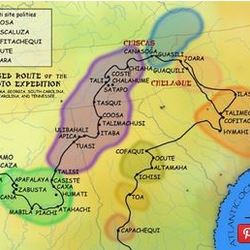 One of the great mysteries of American archaeology is the location of Mabila, a Mississippian village somewhere in the state of Alabama where an all-out battle between the Spanish conquistador Hernando de Soto and the Native American chief Tascalusa occurred.

According to the four de Soto chronicles, on October 9, 1540, Hernando de Soto's expedition through the North American deep south arrived in the provinces controlled by Tascalusa.

Tasculusa (sometimes spelled Tascaluza) was a paramount Mississippian chief rising in power at the time of the battle. Tascalusa's historical importance is reflected in place names that survive today: the city of Tuscaloosa is named for him, of course; and Tascaluza is a Choctaw or Muskogean word meaning "black warrior", and the Black Warrior River is named in his honor as well.

Tascalusa's major settlement was called Atahachi, and that's where de Soto first met him, probably west of where the modern town of Montgomery is located. The recollections of the chroniclers described Tascalusa as a giant, full half a head taller than their tallest soldier. When de Soto's men met Tascalusa, he was seated in Atahachi's plaza, accompanied by many retainers, one of whom held a type of deerskin umbrella over his head. There, as was their usual practice, de Soto's men demanded that Tascalusa hand over porters to carry the expedition's gear and booty, and women to entertain the men.

Tascalusa said no, sorry, he couldn't do that, but if they would go to Mabila, one of his vassal towns, there the Spanish would get what they asked for. De Soto took Tascalusa hostage, and together they all started for Mabila.

De Soto and Tascalusa left Atahachi on October 12th, and they arrived in Mabila on the morning of the 18th. According to the chronicles, de Soto led the way into the small town of Mabila with 40 horsemen, a guard of crossbowmen and halberdiers, a cook, a friar and several slaves and porters bearing the supplies and booty collected by the Spanish since they arrived in Florida in 1539. The rear guard lagged far behind, rummaging the countryside for more booty and supplies.

Mabila was a small village tucked inside a strongly fortified palisade, with bastions at the corners. Two gates led into the center of the town, where a plaza was surrounded by the houses of the most important people. De Soto decided to bring his collected booty and stay himself within the palisade, rather than camp outside its walls.

After some festivities, a battle broke out when one of the conquistadors responded to a principal Indian's refusal to run an errand by cutting his arm off. A great roar resounded, and people hidden inside the houses around the plaza began shooting arrows at the Spanish. The Spanish fled the palisade, mounted their horses and encircled the town, and for the next two days and nights, a fierce battle was played out. When it was over, say the chroniclers, at least 2,500 Mississippians were dead (the chroniclers estimate up to 7,500), 20 Spanish were killed and over 250 wounded, and all of their collected booty had been burned with the town.

After the battle, the Spanish stayed in the area for a month to heal, and lacking supplies and a place to stay, they turned north to look for both. They turned north, despite de Soto's recent knowledge that there were ships waiting for him at a harbor to the south. Apparently, de Soto felt leaving the expedition after the battle would mean personal failure: no supplies, no booty, stories of fierce warriors rather than easily subjugated people. Arguably, the battle at Mabila was a turning point for the expedition, which was to end and not well, after de Soto died in 1542.

Archaeologists have been looking for Mabila for quite a while now, with not much luck. A conference bringing a variety of scholars together was held in 2006 and published as The Search For Mabila in 2009 (Knight 2009).

A consensus from that conference found that Mabila is likely to be somewhere in southern Alabama, on the Alabama river or its tributaries within a few miles of Selma. Archaeological survey has identified a multitude of Mississippian sites within this region, many of which have evidence which ties them, directly or indirectly, to de Soto's passing. But none so far fits the profile of a strongly palisaded village which burned to the ground, killing thousands of people in October of 1540.

It's possible the historic records are not as accurate as one might hope for; it's possible that later movement of the river or rebuilding by Mississippian or later cultures changed the configuration of the landscape. The location of Mabila, along with other questions concerning de Soto's route through the southeastern United States, remains a mystery.